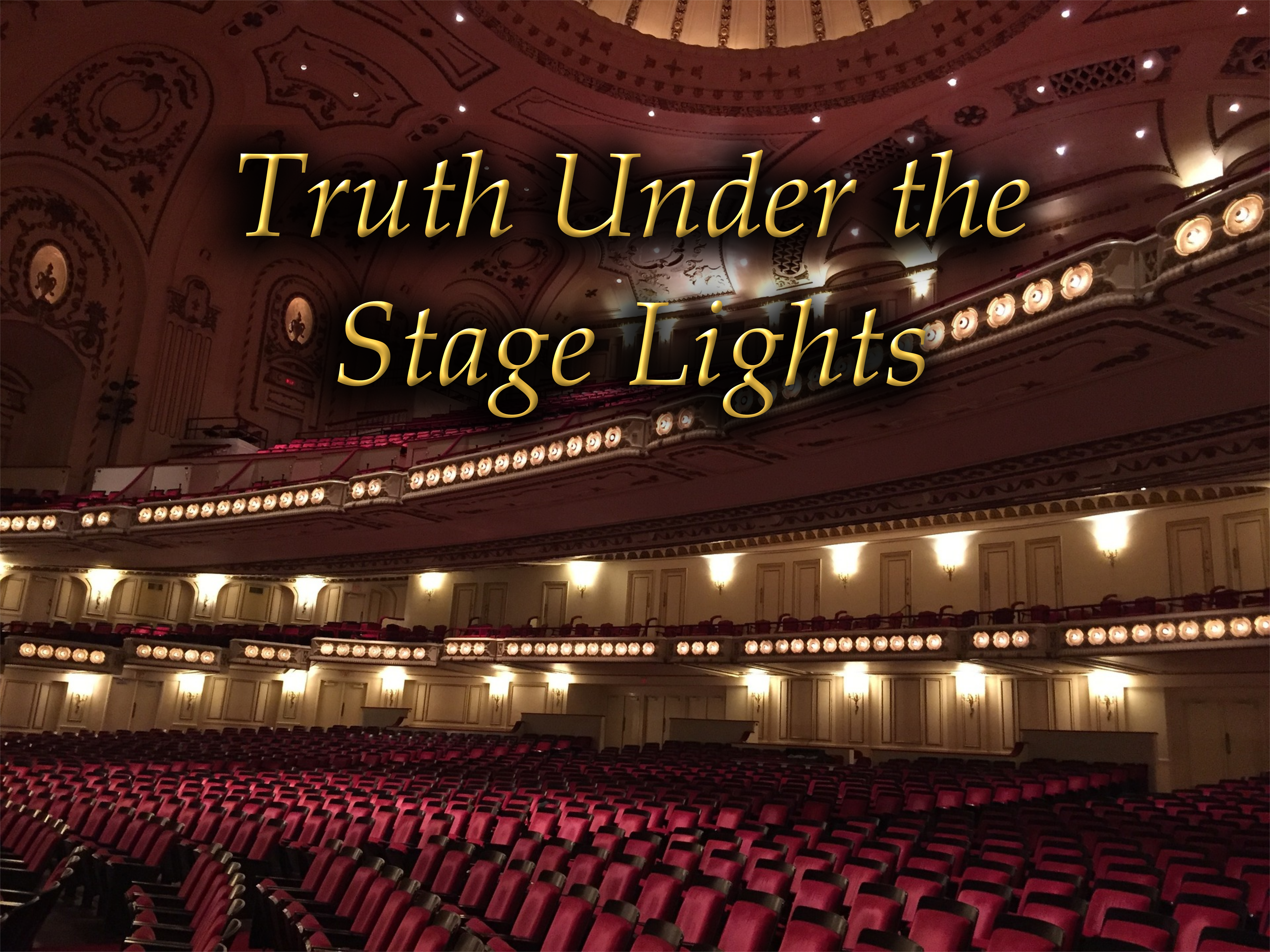 Stage lights possess magical qualities. Under their glare, performers sweat and burn while pretending not to. They to act like they’re the best at the talent they represent, whether it be acting, dancing, or music-ing. The tricky part of dealing with stage lights is that they always reveal the truth.

In a small city’s largest concert hall, a girl with perfect posture stands behind a curtain. Her clammy fingers caress the strings of her violin, and phantom tones escape into the dense air. Onstage, the main sponsor concludes his announcements.

“Thus, it is my pleasure to present our very own Alexis Hoffner.”

The space erupts into the throes of white applause. Alexis grips her violin and crosses into the light. Instantly, the truth pulls at her, staying her steps for a moment. When she regains composure, she joins the sponsor in the center of the stage for her bow.

He pats her on the back and says, “Break a leg” as he makes his way out of the light.

Every person’s gaze points to her. She can feel them, like laser points coating her body. More than that, as she poises her violin upon her shoulder, she can see them. Spider-silk thin lines of intentions stretch from the audience before her to coil around her fingers, her neck, her heart. Suspended in expectation, they glimmer in the hot light.

With a deep breath, she prepares to fight them, as always.

A quick downbow begins the saucy tune. She tosses her hair, a challenge to all who seek to force their will upon her. The strings of influence begin to writhe.

“You must be great,” they say to her. “You must do better than all who come before.”

She continues the tango, twirling about the stage in a match against the invisible invincible threads. For a while, she dodges each one, leaping above and diving under as they coil around her. Now pulsing in shades of scarlet, they swing their full weight against her. Back and forth they spin, no side truly gaining ground, but there are more strings than there are of her.

They wrap her in a cocoon of blood, the tango becoming her requiem. Tangled in their web, she thrashes, yearning to be free. The only movements they allow are the ones that keep her playing. The weight of their influence forces her down.

She leaves the stage, her breath heavy. Away from the stage lights, they barely reach her. Her thoughts clear, and she knows what she must do.

“One more song,” she tells herself as she marches back to the stage. The moment the light hits her, the cocoon crashes back down on her. Mere breathing is a chore. Perhaps she’ll die instead.

After her bow, she faces her captors.

“Ladies and gentlemen, I would like to take a moment to thank everyone who has made tonight possible. Our sponsors, my teachers, my parents, and especially you all. Thank you for making my final performance so meaningful. I couldn’t have asked for any better.”

The cocoon slithers and chokes at her announcement. That is not a part of their plans, and therefore it is unacceptable. She almost falls to her knees. The show must go on, for one more song. She prepares her violin and realizes breathing is no longer an option. It’s amazing how strings so thin can possess such strength.

Small notes whisper across the strings. The threads tighten again, and the audience leans forward in confusion. This is her declaration of freedom, a quiet folk-tune?

She smiles at their dismay. “This is me.”

Spots dance around the edge of her vision, and the heat of the stage lights begin to melt her. She struggles not to cough in seeking more air, but one sneaks in and interrupts the lullaby. The threads pull harder, and she sees red. If she doesn’t finish the song, her final performance will not end, and they win.

“You must,” she begs herself.

The lights around her grow dim, and her violin sounds far away though it sings directly in her ear.

Tighter they coil, sensing the end. Desperate to keep their prized prodigy, they hold with all they have. Yet, she plays on.

The end is so close, but Time draws slower as her consciousness fades. A few notes slip. Her captors squeeze, sensing their victory.

No more lights line her vision. Her fingers operate on their own. She feels them fade away in the dark. She could lie down right where she is.

One more phrase in the darkness, and she can see the end. It bears its own light. Gentle, unlike the stage lights, they lead her where she must go. She no longer feels the need to breathe and wonders why it should even be a difficult task.

Almost there, she smiles at herself. Is she still playing? She can’t tell. It feels that all might be lost. That might be all right. At least the gentle glow is still with her. It feels like a friend. She reaches out to it.

In silence, her hand grabs the edge of the light, the last thing she sees before the dark takes over.

With one final downstroke of the bow, she releases the light, and it rings out to fill the auditorium with a flash of cooler light. As it fans out, it cuts the strings from her body. She gasps.

The audience sits in silence.

Shaking, she rises from her bent-over position. Tears fall from her eyes, and she faces her former captors. Applause rings out, and she smiles.

No nearly-invisible threads shimmer in the stage lights. Only dust fills the air. She is free.