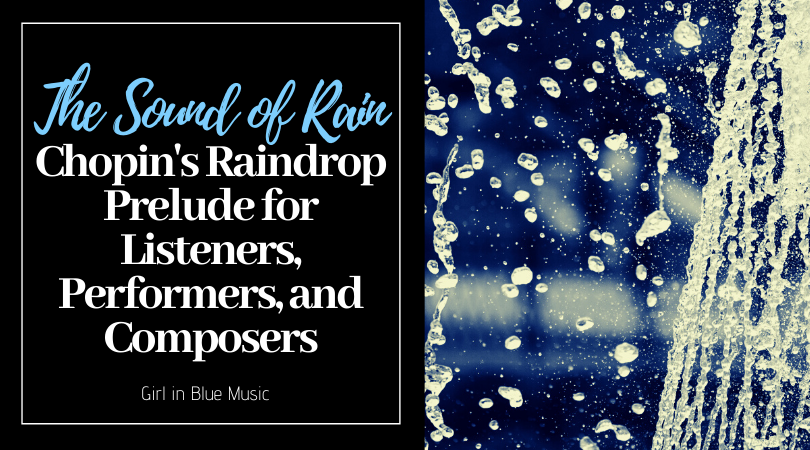 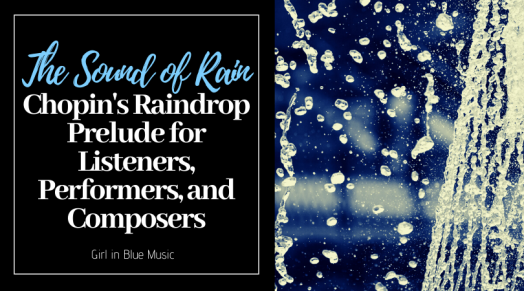 170 years after his death, Chopin still captivates audiences with his music. His set of preludes that cover all 24 major and minor keys are a great starting place to learn how to analyze his work, as it can be dense.

This post looks at the qualities that make us feel the melancholy of the “Raindrop Prelude” (in D♭ Major, op. 28 no. 15) and the fear of the storm and connect this to our own experiences as listeners, performers, and composers.

Chopin did not title this work (or his other preludes). His works were given nicknames by pianists Hans von Bülow and Alfred Cortot based on the feelings they got from each piece, so it’s not necessary to hear a rainy day when listening to this piece.

We’ll start out by zooming way out. The piece is in an ABA structure, meaning the material at the beginning and the end is the same, and something different—in this case a change to the parallel minor (C♯ = D♭)—happens in the middle.

Measures 1–4   The melody descends over a 2nd inversion D♭ major triad, which pretty much sets the scope for the melody. It climbs its way back up to the F on which it started, surpasses it for a moment, and hangs around the F before falling back into a repeat of the first falling triad.

Mm. 10–19   New material. Foreboding but still on top of the gentle repeated A♭ in the left hand. There seems to be foreshadowing in the melody of the stormy section (the B section of the piece), as this seems to be a mini storm within the peace of the repeated first four measures. While the melody is not found in the B section, the movement by steps instead of triads is what caused me to hear a sort of foreshadowing, as the movement is very different, but it still fits within the same scope that the first four measures set out.

Mm. 20–27 Repeat the first 8 measures but this time end on an A♭ dominant 7 (which tends to pull toward the tonic D♭ major OR its parallel minor, C♯). Chopin indeed leads to the parallel minor but in a less tonal way. In these measures, the A♭ keeps repeating on every eighth note, which turns into a G♯ that acts as a common tone to lead to C♯ minor. It’s still technically tonal, but it’s interesting to have the fifth of the chord drawn out on its own to lead into the new tonic.

There’s a feeling of growth, but not a steady growth, that permeates this section. This is seen in the repeated notes of the right hand, which took over the repeated A♭ that is now a G♯.

Measures 28–34 have only this repeated in the right hand, but measure 35 adds an octave above it, which makes it feel better. Additionally, a melody is added within this octave, which creates more depth and complexity. This one repeated note, then added octave with inner voice is repeated in mm. 43–55.

After this, Chopin changes the repeated notes, repeating B for three measures, then going back to G♯ at which point the inner voice that was between the octave G♯s becomes the outer voice. There is a feeling of instability, as Chopin begins the journey back to D♭ major, which occurs in the same way as before, this time with G♯ turning back into A♭.

We come back to the first theme to close out the piece, and we are back in D♭ , which is emphasized by the 2nd inversion descending D♭ major triad from the beginning. The storm is back to being gentle; the birds come out of hiding, and the sun is beginning to peek out from behind the clouds again. It’s that calm moment when the air smells clean, and everything feels at piece, if only for a moment.

As the A theme begins to repeat, it is stopped, and a high B♭ sounds and is suspended without accompaniment, almost like a gentle declaration that it’s all clear. The melody falls back down, and we hear just chords held out over the repeated A♭ in the middle voice. In this way, the music slowly dies away, much like a storm drifting away slowly. 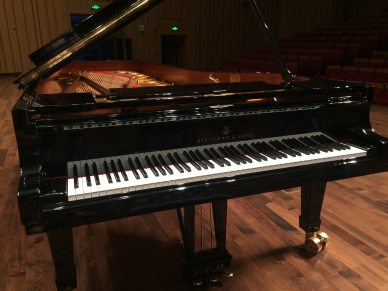 You don’t have to be a music theorist to pay attention to how each section blends into the next. Although Chopin did not write this as program music (he did not ascribe a specific image or idea to it), it does act very much like a rain storm. It starts gently, lets you know it’s raining, gets a heavier, gets softer, and then the storm comes. The midst of the storm is intense, but it levels off and is back to the lightness of the beginning of the rain. Then, as the clouds drift away, the earth is renewed. Plants slowly lift their leaves back up after being pelted to the ground. The quiet after the rain before everything recovers is one of my favorite moments in life, and the coda reminds me of that.

Of course, you can ascribe any image you like onto this piece. Some theorists might argue that this is a “wrong way of listening,” but you can’t help if your brain just comes up with an image to go along with what you’re hearing.

None of these analysis posts are ever meant to provide a complete interpretation of a piece of music but instead offer suggestions on how to think about particular passages of pieces through the scope of performance. When thinking about the overall form in this piece then, it’s important to realize what is happening harmonically, particularly in the transitions between sections.

In the transition between A and B, we encounter that repeated A♭ that turns into G♯. Because it sounds on its own for half a measure, it’s important to think about how you want to lead into the next section. Do you shape it as an entity of itself, crescendoing and decrescendoing over those four notes? Chopin has included that entire phrase as part of the entire first phrase of the B section (because of the slur line that encompasses mm. 28–35), and this section is marked “sotto voce,” meaning “under the voice” or quietly. Where is the climax of that phrase, and where do these lonely repeated notes fit into that phrase?

Ultimately, it’s your choice how to treat those notes, but being aware of their importance shows through in performances of the piece.

This isn’t to say that performers should emphasize the counterpoint. Overdoing it would be a mistake. Simply being aware that there are lines that interact with each other is important in Chopin’s music especially. 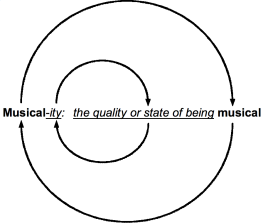 Overall, analysis is important to performance, as it helps to understand the scope of the piece. We can argue all day about what specific notes mean given the context of the piece, of the rest of a composer’s work, of the style in which the composer wrote, and of the historical period it rests in (and theorists do this, literally all day), but at the end of that really long day of arguing, what matters most is what the piece means to you. The answer to that determines how you’ll play it.

You will bring out the notes you think are more important. You will shape the phrases as you believe them to be shaped. But you have to be aware that these things exist in the work, and that’s where the analysis comes in.

Chopin’s work provides numerous examples of how you can successfully take a theme and have it come back in different ways. This is accomplished through varying the theme itself or the harmonies and accompaniment that go along with it.

The first step to doing this is, of course, to write a theme that you like enough to hear this many times. Start with a simple melody, something that sticks. Build from there. Chopin uses two major melodies in this that he transforms: the original theme and then the stepwise, turning about an axis theme (mm. 9–19). The second one especially displays the idea of context around a theme that helps give it meaning or gives it different “flavors.” The first time is more peaceful, but it still does feel foreboding, just not quite upon us yet. The second time is in the middle of the storm, where it does seem to fit, and it keeps growing in strength and volume.

Using the same melodic idea in different contexts within the same piece not only provides cohesion (the piece feels like one whole instead of unrelated section–section–section), but it also provides a sense of growth for even the non-musician listener.

One could argue this is the “strength” of this piece, and that’s an entirely different discussion, but thinking of the melody in this way can help us as listeners, performers, and composers, as all three of these roles are vital to creating music.

An exercise my composition teacher gave me was to write just two or three melodies a day. Just sit down at the piano or open up my favorite notation software and just write the first few melodies that pop into my head or fall into my fingers. Most of them get left to the side, but in this practice of discipline does inspiration more likely visit. Plus, I’ve had many occasions where I’ve thought a melody or little sketch was terrible, and then years later I’ll revisit it and find a different context for it, and it’s really exciting.

Creating Emotion in Your Music

Music theory analyses can easily become very abstract, focusing on really tiny things within the music, so it’s important to always trace it back to your end goal. For this post, it’s creating that powerful emotion that brings people back to Chopin’s music.

Listeners, Performers, and Composers all have different roles in the creation of music, so analysis helps us identify where we fit and how to better feel or create the feelings present in this music.

Overall, remember that simplicity becomes complexity with layers. Growth can include the same ideas in different contexts. And feelings in music, whether composed by you or someone else, must be honest for others to feel them. Discipline allows you to be honest with yourself, especially at your most vulnerable when you feel you have no more ideas.

Then will you be able to summon the sound of rain in your own works.